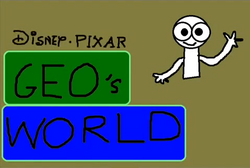 Geo's World is an American computer-animated comedy television series based on the comic strip of the same name. It is created by Geo G. and produced at Pixar by John Lasseter and Andrew Stanton. It first premiered on the American Broadcasting Company on October 28, 1989, as a first episode Geo Guy's Midnight Sleep, which led to a series of half-hour episodes. The series had ended on June 5, 2013, leading to the production of an upcoming new version of Geo's World known as Donald's World. Though, Donald's World got very little viewership and negative reviews on it's "sneak peek" premiere but is still in production.

Geo's World was conceived by Geo since 1978 shortly before a solicitation for a series of animated shorts with the producer Terry Ward. Geo created a world and named the characters, substituting Geo Guy for his own name. The shorts became a part of Universal Press Syndicate on July 14, 1981, becoming the network's first series to land in the Top 30 ratings in a season (1989).

The series aired on ABC and its affiliates worldwide, except in Canada where it has aired on English and Francophone Teletoon networks due to Canadian television ownership regulations with a total of 269 episodes.

On October 2012, Geo G. stated that the show is only halfway through its lifecycle and will continue through June 5, 2013 so that he and his crew may focus on his other show, Geo TV, in 1998. A reboot titled Geo's Universe was aired on Cartoon Network in Late 2013. This became a scandal that deluded many fans of the show and Geo G. found out and decided to create Geo's Universe.

All episodes were directed by series creator Geo G.

The Geo's World film series are not ABC original movies, it was premiered in movie theaters.

Retrieved from "https://geosworld.fandom.com/wiki/List_of_episodes?oldid=34110"
Community content is available under CC-BY-SA unless otherwise noted.