Geo's World: Bob Beanson's Rampage, known in Europe as Geo's World: Bob Beanson's Revenge known in Japan as Geo's World: The Greatest Adventure Ever! (ジオの世界：史上最高のアドベンチャー! Jio no sekai: Shijō saikō no adobenchā! lit. "Adventure of the best ever: World of Geo!"), is a platform game published by Activision, (Konami in Japan) or (THQ in Super Game Boy and Game Boy Color) and Developed by Traveler's Tales or Tiertex Design Studios for the PlayStation, Dreamcast, Nintendo 64, Game Boy Color, and Game Boy.

Geo's World: Bob Beanson's Rampage is a platform game and the gameplay flows in a similar manner to Geo's 1st Movie, which the player can play as Geo Guy, the main protagonist from the show. He had several moves which were running, jumping, attacking with his slingshot, picking up things (such as coins), growing Bloo and plants, throwing Bloo and plants, Using a butt-bouncing, swinging and sliding. In the game, the player must collect all red coins.

The game was in development for almost one year, and throughout this time numerous changes were made to almost every aspect of the game, while the various engines used in the game were all tweaked to optimize their performance. The engine tweaks allowed Geo's World: Bob Beanson's Rampage to have no loading times or fogging and be able to display high quality textures in a seamless, multi-level world.

Bob's Beanson's Rampage was well received. It received a 6.2 out of 5 from Official PlayStation Magazine. IGN gave the game a 9.8 out of 10, praising the sound, graphical style, and gameplay, saying, "While it's generic collect, jump, and kill mechanics, the variety and general Geo's World zaniness keep things fresh".

The game has won numerous awards, including the Kid's Choice Award for Best Video Game of the Year, and entered the Greatest Hits for the PlayStation. 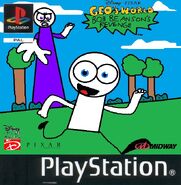 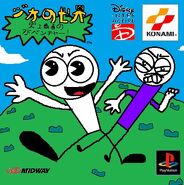 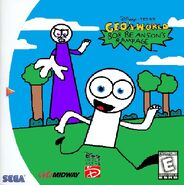 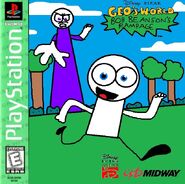 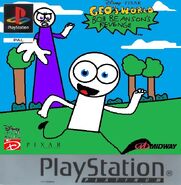 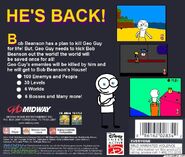 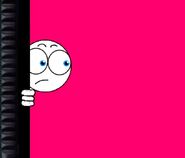 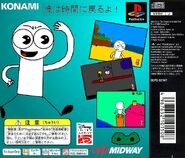 PlayStation Japanese Back Cover
Add a photo to this gallery

Title Screen
Add a photo to this gallery

Retrieved from "https://geosworld.fandom.com/wiki/Geo%27s_World:_Bob_Beanson%27s_Rampage?oldid=21811"
Community content is available under CC-BY-SA unless otherwise noted.